The arrest took place “without incident” at 11am Monday in Hialeah, Florida. 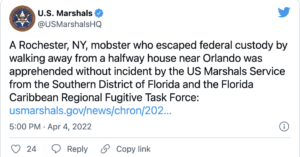 The 64-year-old never returned to his halfway house on March 28th, where he was then marked as an escaped fugitive by U.S. Marshals.  Taddeo previously spent decades Sumter County medium security prison in Florida after pleading guilty to three murders and two attempted murders back in 1992.  All of these charges related to his involvement in La Cosa Nostra. He was originally scheduled to be released in February 2023. Thomas Marotta, a mob rival captain back in the 1980s, was among Taddeo’s targets.

He also pleaded guilty to weapons offenses, drugs, and organized corruption among other offenses.  Taddeo was eventually convicted of federal racketeering charges in his case.