You are at:Home»Colombo Family»‘Majority’ of Colombo administration arrested on racketeering, extortion charges

The bust was carried out in a join operation between the NYPD and FBI to unravel a labor racketeering and extortion fraud system.

In Brooklyn federal court, 14 defendants were charged on a 19 count indictment. Of these 14, 10 alleged members of the Colombo crime family were reportedly attempting to penetrate the long-standing construction labor union and its healthcare program in Queens.  The defendants are also facing extortion accusations having to do with workplace safety certifications.

One of the defendants, Ricciardo, was caught on a wiretap saying life-threatening statements. 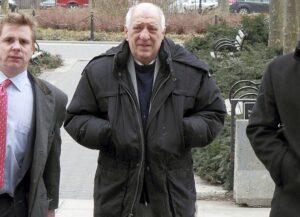 Acting U.S. Attorney for the Eastern District of New York Jacquelyn Kasulis stated, “oday’s charges describe a long-standing, ruthless pattern by the administration of the Colombo crime family, its captains, members and associates, of conspiring to exert control over the management of a labor union by threatening to inflict bodily harm on one of its senior officials and devising a scheme to divert and launder vendor contract funds from its healthcare benefit program… In addition, for their own enrichment, the defendants conspired to engage in extortionate loansharking, money laundering and fraud, as well as drug trafficking.”

Castellazzo’s attorney, Jenifer R. Louis-Jeune, made a statement supporting her client’s innocence; while Attorney Seth Ginsburg is confident that Ferrara “will be vindicated.”

“Everything we allege in this investigation proves history does indeed repeat itself. The underbelly of the crime families in New York City is alive and well,” said FBI Assistant Director-in-Charge Michael Driscoll in another statement Tuesday, “These soldiers, consiglieres, underbosses, and bosses are obviously not students of history and don’t seem to comprehend that we’re going to catch them.”